FAQ Category: About the Books

Wow, I ended up doing months of indepth research, like scouring 6 FBI agents’ memoirs, an ATF agent’s memoir, multiple websites on white supremacy, a phone consult with retired ATF Senior Special Agent Cynthia Beebe, and blog posts from former members of a WS group on what that inner world was like and why it attracted him at the time.

I recommend all these memoirs if you’re interested in further knowledge about the lives of LEOs (law enforcement officers.) In no particular order:

Boots in the Ashes, by Cynthia Beebe (ATF memoir.)

What Every Body is Saying, by Joe Navarro (how to read body language.)

Special Agent, by Candace DeLong (memoir by one of the first females in the FBI.)

Extreme Ownership, by Jocko Willink and Leif Babin (about SEALs.)

Ghost: My Thirty Years as an FBI Undercover Agent by Michael R. McGowan and Ralph Pezzullo

The Pretender: My Life Undercover for the FBI by Marc Ruskin 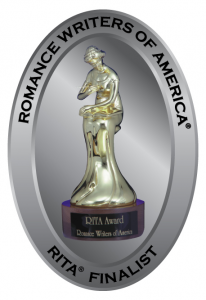 The RITA® award was Romance Writers of America’s highest award of distinction, recognizing excellence in published romance novels and novellas. (It’s presently called the Vivian.) Up to 2,000 romance novels and novellas from 12 different categories are judged each year in the RITA competition. After the first round of judging by fellow published romance authors, the competition narrows to approximately 100 finalists, who receive the notification in March.

In 2017, my novel Tall, Dark and Damaged was named a finalist in the Romantic Suspense category.

I liken the experience to getting an Oscar nomination! By far, it’s been the highlight of my career.

Yes and no. Locked, Loaded and Lying is a ‘whodunit’ stand-alone, and at this time I have no plans to turn it into a series. (Read an excerpt.)

My Damaged Heroes series is comprosed of four books encompassing four heroes, and although they can certainly be read as individual novels you’ll pick up hints and details if you read them in order.

The first is Tall, Dark and Damaged, which is set in Chicago in late October. This is a modern Gothic romance about second chance love, sibling rivalry and a cat-and-mouse killer who will do anything to keep the skeletons in the closet a secret. This is also the novel that finaled for a 2017 Romance Writers of America RITA Award. Read an excerpt.

The second novel in the Damaged Heroes series, Capturing the Queen, takes place six months later, in May. This is a Beauty and the Geek romance where work adversaries accidentally fall into a rabbit hole of black market artifact smuggling and lone wolf terror. Read an excerpt.

The third book in the Damaged Heroes series, A Savage Trick, is set immediately after Book Two ends — so still May. It works if you pick this up without reading the first two, but I’ll be honest, I think you’re cheating yourself. I’ve hidden something in here that will blow your mind if you read Capturing the Queen first. This story is about a hero firefighter accused of physical and sexual abuse. But in this #MeToo era how can he get anyone to believe in his innocence? Enjoy the excerpt!

The fourth and last book in the Damaged Heroes Series, Incendiary Attraction is set later that same year and features another Quinn brother, Jace, goes undercover to infiltrate a dangerous white supremacy cell. Once again, this novel works as a stand-alone, but becomes more meaningful if you bring in the richly laidout backgrounds from the other plots. Also, like any series, it’s fun to visit all the characters from the previous novels and see how they’re doing. The romance angle effectively combines in-love-with-an-older-woman and in-love-with-your-boss tropes. Personally I think it’s hot! Enjoy this excerpt!

Tell me what you think!

Oh my gosh, I made a DOOZIE! I’ve never felt compelled to tell anyone just to see if a reader will pick up on the glaring, stupefying mistake I didn’t catch in proofreading. But no one’s made a peep since the novel came out in 2015, so I may as well finally spill!

In Locked, Loaded and Lying the hero (Lock) saves the heroine (Jordan) in a car accident in Chapter One. Thereafter, for the rest of the novel, she has her badly sprained ankle in one of those big plastic boots that looks like a ski boot. Any physical action on her part is obviously limited because of her injury. Well, the last chapter is set a week after their adventures and she is wearing black high-heeled boots. Ack!

As someone who was in a boot for 6 weeks, I can assure you: months went by before I could tolerate any form of elevated heel!

Oops…oh well. Three editors and several proofreaders missed it too.

You’re welcome to read an excerpt, buy the book or watch the trailer. Enjoy!

I did only in Tall, Dark and Damaged. I created the setting based on my seven-year-old memories of my grandparents’ home in Winnetka, IL. Read some of those details in this excerpt.

The mansion in the novel is an exact replica except for adding the art galleries, theater and First Edition library. All the other rooms, decor, gardens, orchards, fountain, etc., are real. The spiral back staircase to get to the kitchen used to creep me out, the thunderstorms really did sound like cannon fire against the cliff and the stormy Lake Michigan waves pounding against the cliff made the house shudder. The stone staircase to descend to the beach really was dangerous, narrow and slippery and the boathouse WAS carved into the cliff, halfway down, and shaped like a miniature castle!

As for inserting people, I didn’t base any of the characters on anyone in particular, but my siblings and I had a nanny when we lived in England named Gwen Farlow, so that became the cook’s name. Moore and Morrow (the art restoration firm’s name) and Walter,  are also names of family or friends.

If there’s a particular scene in the book you’d like to know more about feel free to ask me!