Inside Secrets into my next novel! 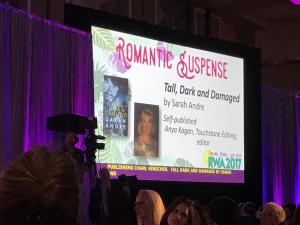 Thank you to everyone who emailed me after watching the live streamed RWA RITA Awards! The talented Elizabeth Naughton won the romantic suspense award, but just seeing my name and Tall, Dark and Damaged on the Jumbo-tron gave me goosebumps! Another highlight was being greeted by other romance writers with, “Oh my gosh, are you Sarah Andre?” Wow! A glimpse of what it’s like to be famous!

If you haven’t had a chance to pick up this modern-day Gothic romantic suspense, this is your chance! It’s Book One in my Damaged Heroes series. And after a tremendous launch of Book Two, Capturing the Queen in June and that fabulous week in Orlando, I have officially begun the next novel!

A Savage Trick, Book Three. Here’s some inside scoop:

The setting is still Chicago, the time is just after Capturing the Queen ends, which is end of May. My new hero is Patrick Quinn, Sean’s older brother and a lieutenant at Fire Station 126 in the South Shore. If you’ve read Capturing the Queen you’ll know his nickname is Trick. (Get it?)
As of now (remember I write by the seat of my pants and rarely know what happens a few sentences ahead) Trick and other firefighters are helping the FBI wrap up the terror investigation from the last book, but a horrific surprise awaits him after the end of an extended and exhausting shift. He will spend the rest of the novel fighting to build his life back to the riveting first chapter when he and his crew are battling a four-alarm blaze. It may have been life threatening, but he had some semblance of control then. Hope to publish in the spring of 2018. Stay tuned!

← Back to All News